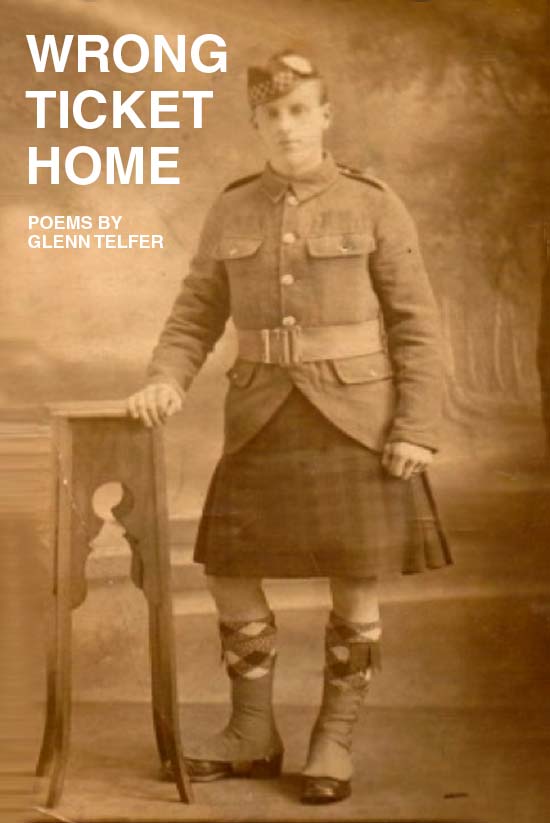 Poems about war and its place in our mind and our soul.

The last century has witnessed killing on an industrial scale. Too many got the wrong ticket home from their foreign trip. Is this the price of glory, is it worth it? You can ask the question, but who has the right to judge the answer.

Mr Watson ordered breakfast
this morning in French.
Oh no, there must be a mistake,
he doesn’t speak French.
No, he spoke good French. I did
a Higher in it. We had a
good conversation before
the drugs took him away.

Christ, he kept that hidden!
true to his Edwardian upbringing
modest to the end never moaned
patiently waiting on the sun he
ay claimed would be along in time
broken at just 70 by all the
troubles of the century.
And now, we mounted final

guard around his bed while
we waited on him stepping
over to the other quarters.
Right at that last moment
before the bullet that didn’t get you
finally got you I like to think
you were with your old mates
you told me off

in some estaminet ordering
eggs and chips in French
for the last time it was
always the last time for
some of them, young Lt Cowan
training to be the lawyer
he never became. Tam, Don’t…!
you told him, and you’d no

sooner said it when he was
killed right there on the firestep.
It was a mad wicked thing,
but I never met finer people-
that’s how life balances itself.
All those fine fellows who
got the wrong ticket home
just one now was waiting

Grandad, nearly fifty years
after your final roll call I salute
you and your kind and see
you with Jack and Pat easily
in my mind’s eye loosening
your belt, taking off your
tammy and waiting to be
offered a seat.