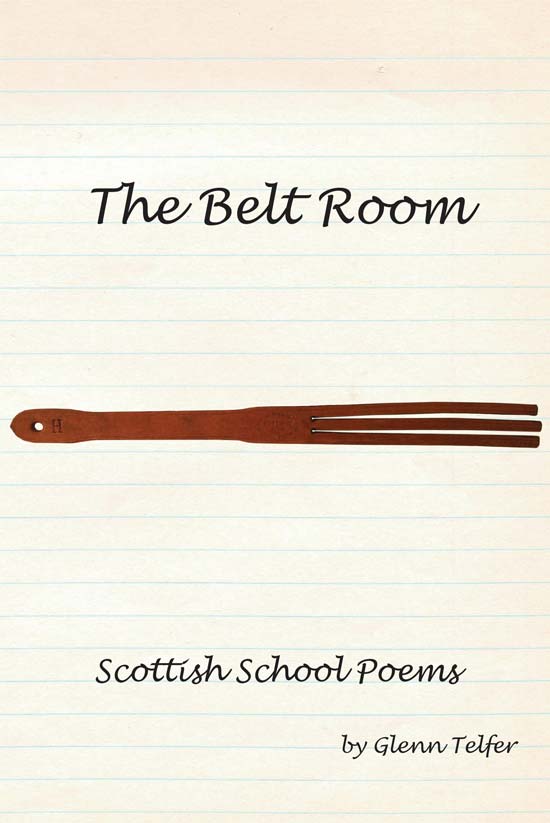 A collection of poems inspired by a Scottish education in the ‘60’s. You could not make this up; I didn’t need to!

1982: Time, Gentlemen, please. There will be no more belting of children. From now on they will be belting us!

The Glasgow poet considers his schooldays and in particular the connection between improvement and thrashing the living daylights out of children. He is well qualified to comment, having received well over 1000 rounds in his fairly average school career. (Think of a Vickers gun on a tripod and 4 big boxes of ammo).

The final record of a pedagogic technique much misunderstood in our age.

He had been a Gunnery Officer
in the navy during the war
and in a way maintained
the old tradition of the broadside
as he swapped professions, a little!
Teaching maths as a subset
of ballistics, sort of…

The scuttlebutt was that he was a bouncer
at the weekend and actually, even here
forty years on, it’s still believable.
Big and powerful with scourging eyes
in teaching style more quarter deck
than wise Seneca.

I’m sure he thought of the belt as the gentle alternative to the cat.

Once, on a school trip
the bus passed Ibrox Stadium
a big cheer started to wind up
us being Prods and
he just turned his head ever so slightly
to look at us and killed it dead.
That’s power.

The toughest kids, and there were some,
were impotent within the force-field
of his personality. And his belt.
This was psychology
but backed by a mighty firepower
of the main armament of A turret.
You stood no chance.

Jacket off; the drama of the square go
without the square or the go
pulled the tawse from his desk
like pulling a chib from a sheath,
after that the analogies shift
back to guns
as getting one felt like being shot
through the hand

this was no symbolic punishment
your hands were dead to writing
for the rest of the lesson.

Once there was a mix up
at the multiple 0.5” Vickers
and I shot at our own gun boats
(as if?)…over collecting
jotters or some such
and I got the blame.
It was an injustice and so
with bitter determination I vowed
not to give him the satisfaction
of seeing me hurt.

Took two rounds; Bang! Bang!
And then the pause, as if reloading,
as he checked me for damage,
Here’s another couple for luck!
Bang! Bang!
And only writing this here
do I realise that this was intended
as a joke. Ha f…..g ha!

He would have known that
look of resolve well
and must have enjoyed
a certain professional satisfaction
from seeing the tension in the geometry
as the hands were raised
snap when the contact was made.
And then the pain
that lived in the eyes despite
the strongest of wills
as the juice squeezed out
and glazed the lens.

As, in this grim parody of teaching,
order was restored amongst
the mutineers and the rest
of the crew subdued to the silence
of earnest application to jotters

broken only by the occasional cough
or the sudden bang
of the 2lb QF gun in some other class
fighting off a raid by torpedo boats.