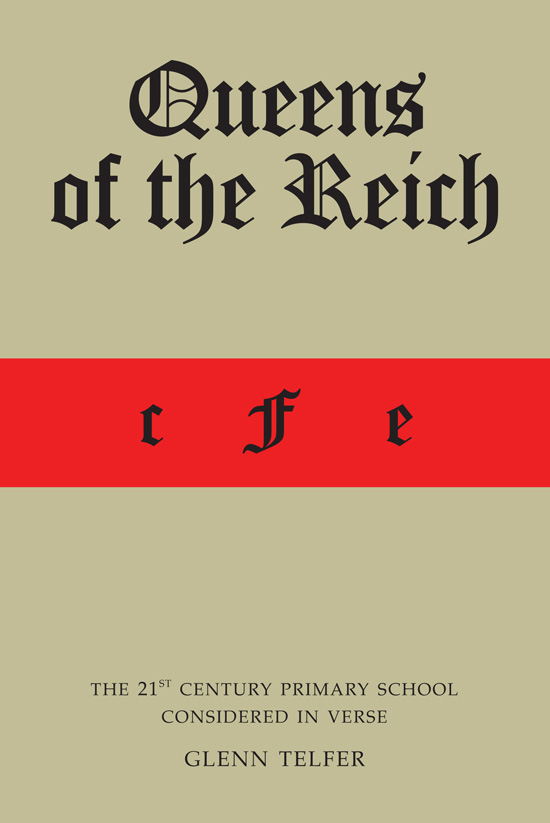 Queens of the Reich – sample

Into this super-charged feminine environment, already multi-tasking to distraction, let’s add the usual cast of sorcerers’ apprentices from government and council HQ, see where it takes us.

Never has our bedrock institution been so correctly gendered and well-endowed with hyperbole. Our children are being well prepared for the unfortunate future they will undoubtedly inherit. The jaundiced eye meets the cheery disposition in this collection.

to those in range.

Did a hostile god plant this idea
into the empty vessel that was
the Head’s head just as she came
into assembly as a warning to those
able to hear, or was it just done
as a cruel joke

to mock our Head for some slight;
no votive offering at the tray bakes
or excessive worship at the altar of
Curriculum Change? Who knows, but
the cantrip cast was unmistakable;
she didn’t have a clue

what she was saying.

And, with the Emperor’s New Clothes
finally mocked; amazingly, ironies piling
atop each other like stacked pancakes,
the story segued into a random collection
of party propaganda that is the new
curriculum

probably thinking with this she was
‘Leading the Change!’
Among those staff with the wit
and inclination for it
facecrimes were being committed,
and in front of the children too!

Was she taking the piss?

a colleague asked as
the children filed out for playtime,
fortunately no wiser, having not been
listening anyway! Being close to
this inadvertent pantomime and
seeing in our leader’s eyes not the

slightest gleam of self-awareness,
far less sarcasm, in her masterly
performance of nonsense, and keen to
defend her against a charge of cruel
rebellious intelligence, I was able to
confirm that the piss was indeed being taken,

but that she was a mere puppet voice

for a mocking god; Well, hopefully!
The alternative being too terrible to consider
but a powerful lesson learned, though,
this story must be handled like nitroglycerin
especially in front of an audience containing
that wee boy.