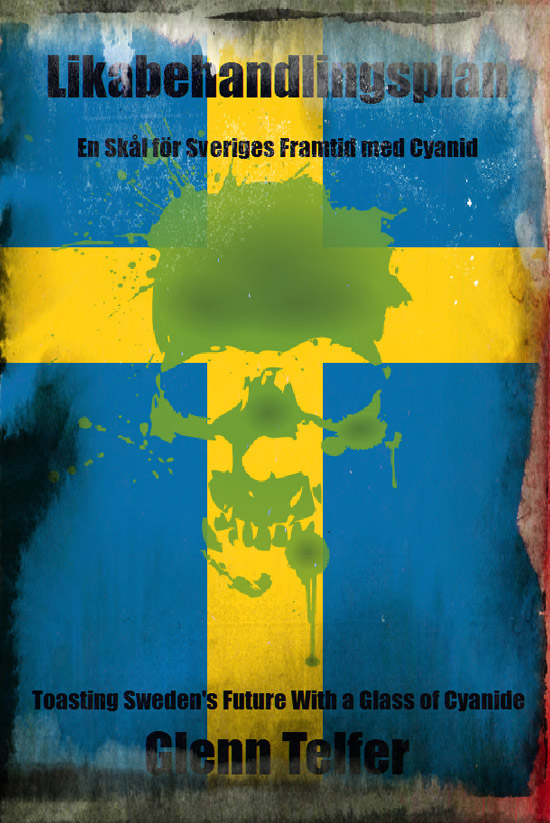 Likabehandlingsplan: A Toast to Sweden’s Future with Cyanide – sample

Terrifying and compulsive, this most fascinating phenomenon which empties the box of hyperboles; a nation state utterly surrenders itself and abandons a blessed future for hubris masquerading as social justice.

This collection considers (with lighter scenes as a pause for hyperventilation) what happens when the desire to be good, to be seen as compassionate, to do the right thing for all the unfortunate others in the world becomes a self-destroying orthodoxy.

Farewell, Du gamla, Du fria. I’ll see you on the other side, cleaning out Valhalla’s pigsties!

Wearing the uniform, or whatever…

chewing gum, texting, chatting
foot up against the door
lout-style, the esprit de corps
of our night watch officers

pepper spray, stab-proof vests
on public money doing
nothing but representing
the principle far in excess

of public safety, their purported
and pretended purpose, when
spotting some real louts
(MENA, surprised?) getting on

so staggeringly a bold display
of cowardice that it becomes
an incentive to behave bad
for those in two minds about it,

provided at commune expense.
What public purpose is served
by this perfect expression of less
than useless you might think;

in the tableau viewed as the train
pulled away, one at the booth
ordering the coffees the other
busy texting and the last

stretched out on a bench, no doubt
exhausted from various forms
of loafing, already ear-phoned and
all utterly invisible to the public

in harmony to the internal hysteria
of the country as it gives itself away
in a kind of collective suicide
but being Sweden, ever so quietly.

Meanwhile, for us incarcerated
for another stop, the louts
upped the ante in the game
of ‘stop me if you dare’ and for

protection I imagined another watch
and see Captain Cocq stepping
out of the painting:
I‘ll show the Zweeds how it’s done.

Arquebusiers, prepare your pieces.
Pikemen, follow me,…
Gentlemen, let us restore our good name.
Fellow Citizens, be not alarmed!